The ideal combination is the group of founders who are “living in the future” in the sense of being at the leading edge of some kind of change, and who are building something they themselves want. Most super-successful startups are of this type. Steve Wozniak wanted a computer. Mark Zuckerberg wanted to engage online with his college friends. Larry and Sergey wanted to find things on the web. All these founders were building things they and their peers wanted, and the fact that they were at the leading edge of change meant that more people would want these things in the future.

Yeah, I’m gonna go ahead and call BS on this. There’s nothing in the public record that makes me think that Zuckerberg had “friends” he wanted to connect with, or that Larry and Sergey couldn’t already find “things” on the web with Alta Vista or Yahoo! at the time. This is just revisionist billionaire protectionism.

Paul is trying to share well-known startup examples which prove that the average billionaire-founder isn’t building their empire on exploitation, but those two examples might be the most counterproductive that he could have possibly used. Both of these are of people who saw a business opportunity to exploit people’s behavior online to sell advertising, and built products to surreptitiously profit from it. If there was any consideration of building a better mousetrap, it was only to trap more mice for the purpose of milking them; not delighting them.

That, not exploiting people, is the defining quality of people who become billionaires from starting companies. So that’s what YC looks for in founders: authenticity. People’s motives for starting startups are usually mixed. They’re usually doing it from some combination of the desire to make money, the desire to seem cool, genuine interest in the problem, and unwillingness to work for someone else. The last two are more powerful motivators than the first two. It’s ok for founders to want to make money or to seem cool. Most do. But if the founders seem like they’re doing it just to make money or just to seem cool, they’re not likely to succeed on a big scale. The founders who are doing it for the money will take the first sufficiently large acquisition offer, and the ones who are doing it to seem cool will rapidly discover that there are much less painful ways of seeming cool.

Here’s where the wheels really come off his “essay.” All of the recent startups that have made the national consciousness — like GrubHub, Bird and Lime, and especially Uber and Lyft — all of them rely on exploiting underemployed people. Most people don’t realize how much it costs to employ someone, and traditional companies have borne a lot more than people understand. All of the “gig economy” work — as currently engineered — is exploitative, seeking to offload the burden (to us the technical term) of employing someone. If a person in a “gig-economy” job would factor in those costs, like wear-and-tear on their vehicle, or the increased insurance cost (that people should be taking out), a lot of people would find that they are actually losing money working for these companies in a “gig economy” position.

You can look at a simple chart of expanding productivity vs. flat realized income over the past 40 years, and quickly see that “trickle-down” economics hasn’t fulfilled it’s stated promise (no matter how much Rush Limbaugh tries to brainwash you otherwise), but the downward pressure on income for the past 10 years is coming more from exploitative “web 2.0”-type companies than traditional manufacturing, and the fact that the dot-com billionaire class, pushing the gig-economy, has been able to largely avoid scrutiny for that is proof that they’re rigging the game through the influence and cover their social-media-focused products can provide. 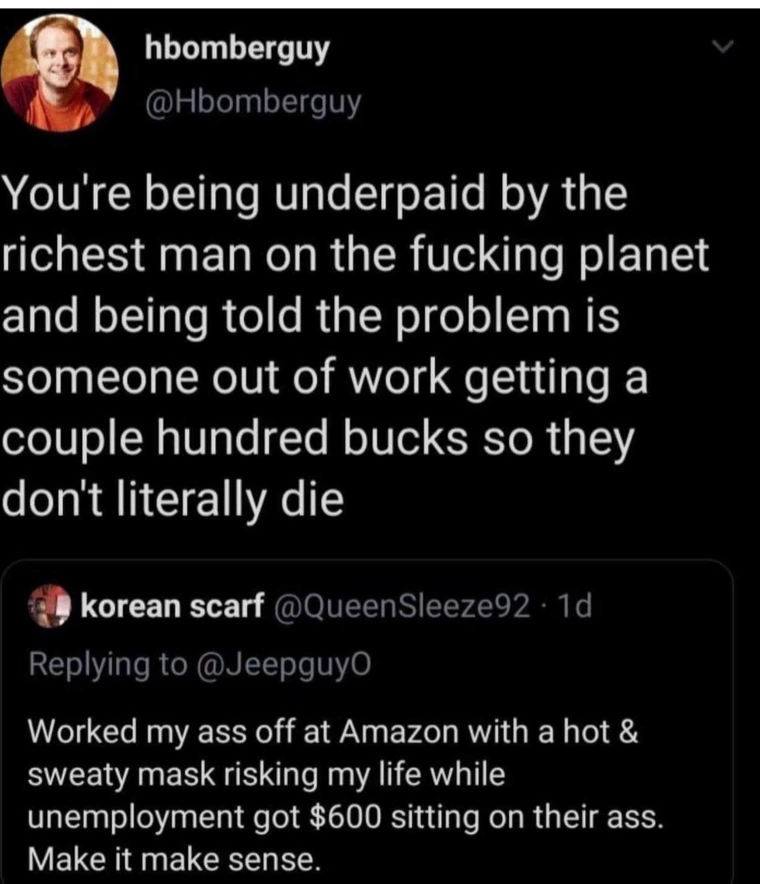 Graham’s “essay” is a joke because he — representing billionaires — and I — representing the other 7 billion other people on the planet — are talking about two different things. He defines “exploitation” as, say, child labor in the Orient, when the rest of us are defining it as “not making a fair deal with someone for their time.” Then, Graham ascribes political pressure to push the scales of balance of this trade back to the middle to simple jealousy, and that’s when his true colors really shine. Not only is he deluding himself about what it takes to exploit someone, he’s accusing people having a problem with the situation as being affected by base emotions, which are easily dismissed.

The most reliable way to become a billionaire is to start a company that grows fast, and the way to grow fast is to make what users want. Newly started startups have no choice but to delight users, or they’ll never even get rolling. But this never stops being the lodestar, and bigger companies take their eye off it at their peril. Stop delighting users, and eventually someone else will.

Stop it. Just stop it. You’re making yourself look silly, now, Paul. It’s been a long, long time since YouTube, Facebook, Amazon, or Twitter “delighted” anyone. They are all predatory monopolies now — with nation-state-level influence — and they are all exploiting people and gaming governments to stay that way. Google and Amazon, in particular, were delightful, 20 years ago, when they gave us things like Google Reader, and the ability to block sites from search results we found counter-productive,  or highly-curated, highly-rated selections to choose from, with high-quality reviews to help make a selection. Now that they’ve achieved monopoly positions in their market, they no longer have to trouble themselves with such things as being easy or helpful to use.

In the old days, wildly successful companies and people would at least be expected to pay an increasingly-significant level of tax, but quiet changes to the tax laws over the past few decades has essentially given us a flat tax on income, and zero tax on corporations. Bezos is on track to becoming the first trillionaire by the time he dies, while the national debt has risen to $30 trillion dollars, and half the country is struggling to pay rent. The executives at all of these companies almost certainly pay less income tax, on a percentage basis, than I do. It seems like something has become seriously misaligned in our economy here, and I wonder how bad it’s going to have to get before something is forcibly done about it.