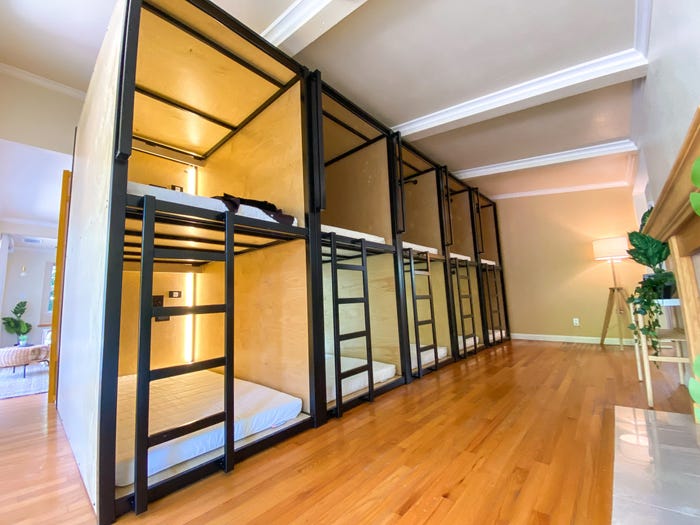 The co-living concept from Brownstone Shared Housing currently has two locations: one in Palo Alto, and another in Bakersfield.

Source: A California startup is offering cocoon-like pods to allow 14 residents to share a single house as an escape from soaring rents and real estate prices

Here’s this article again. It get rewritten every year or so. The dystopian take is that we’re headed for the “pod living” in some Asian countries, but the US has so much land, people will move to other places before living like this in aggregate. We’re just not bound by lack of available land like Japan or Hong Kong. If nothing else, the financials will basically make it happen.

This is a perfect, illustrated example of venture capital squeezing out individuals, cornering a market, and trying to extract ALL the profits from it. This sort of behavior is why housing prices have shot up nationwide. Home ownership was already under siege from underemployment, inflation, and educational loan burdens. Now we have the malfeasance of big companies trying to capture the low-hanging fruit in the housing market, which will only serve to further erode the American dream of the middle class, to the benefit of the already-wealthy. Zillow may have over-leveraged their algorithm here, but, rest assured, there are people out there doing this on a wide scale.

Among many things, including talent, opportunity, and soft power, the technology industry has brought tremendous tax revenue to the Bay Area. The budget of San Francisco literally doubled this decade, from around six billion to over twelve billion dollars. With our government’s incredible, historic abundance of wealth, the Board of Supervisors has presided over: a dramatic increase in homelessness, drug abuse, crime — now including home invasion — and a crippling cost of living that can be directly ascribed to the local landed gentry’s obsession with blocking new construction. This latter piece is important, as it appears to be the only thing our Board cares about. This is because significantly increasing the local housing supply would decrease the value of the multi-million dollar homes almost every single one of our Supervisors owns, and we could never have that.

This is the most-direct analysis I have seen of why Silicon Valley has become the most overpriced area in which to live in the US. The situation described here is heart-wrenchingly discouraging, but what’s completely and utterly heart-breaking is that nothing seems to be getting learned by it. I’ve watched the San Francisco housing market from afar — with no small amount of schadenfreude — for many years now. They’ve been on this course for a couple of decades or more, and it just keeps getting worse. Instead of enacting any policies to help matters, they keep doubling down on the liberal policies and NIMBY-ism that has gotten them into such a sorry state of affairs to begin with.

San Francisco-based “co-living platform” HubHaus has collapsed, saying it has no funds, leaving people using its platform to rent rooms in the Bay Area, Los Angeles, and Washington DC, in limbo.

Oh, look. A scammy “Web 2.0” app company reselling real estate in a ridiculous housing market has failed to understand either part of that equation.

Haven Coliving houses mostly people who work in the wellness industry. There are activities like yoga and vegan cooking classes. The housing is comprised of four multi-million dollar homes that are connected to one another. “In Los Angeles, where a one bedroom in Venice would be about $3,000, our membership dues are $995,” says founder and CEO Ben Katz. Katz says that about $1,000 a month will get you a bed in a private pod in a shared room. Sheets and towels are provided and changed weekly.

Housing costs have become so expensive in some cities that people are renting bunk beds in a communal home for $1,200 a month. Not a bedroom. A bed.

Given the software/tech-related bent of my news feeds, I see the ridiculous cost of housing in the Valley come up a lot, but I think it’s largely invisible here in the midwest. I’ve posted articles about single bunks in flophouses going for thousands of dollars a month, but now, finally, naturally, there’s someone who has started a bunk-as-a-service company. A “share” allows you to stay in any of their flophouses. At least the CEO seems pretty pragmatic about it, and doesn’t come across as the usual, crazed, psychopathic founder type.