A big question hangs over Janet Yellen this week at her confirmation hearing to become U.S. Treasury secretary: How much debt is too much?

In the past four years, U.S. government debt held by the public has increased by $7 trillion to $21.6 trillion. President-elect Joe Biden has committed to a spending program that could add trillions more in the year ahead. At 100.1% of gross domestic product, the debt already exceeds the annual output of the economy, putting the U.S. in company with economies including Greece, Italy and Japan.

Source: The Debt Question Facing Janet Yellen: How Much Is Too Much? – WSJ

There it is, and Biden hasn’t even taken office yet! For the first time in four years, someone in the press noticed the national debt. We only care about the debt when a Democrat is President. Search and see for yourself. WashPo, CNN, Pro Publica all wrote articles about the debt in the past 5 days. 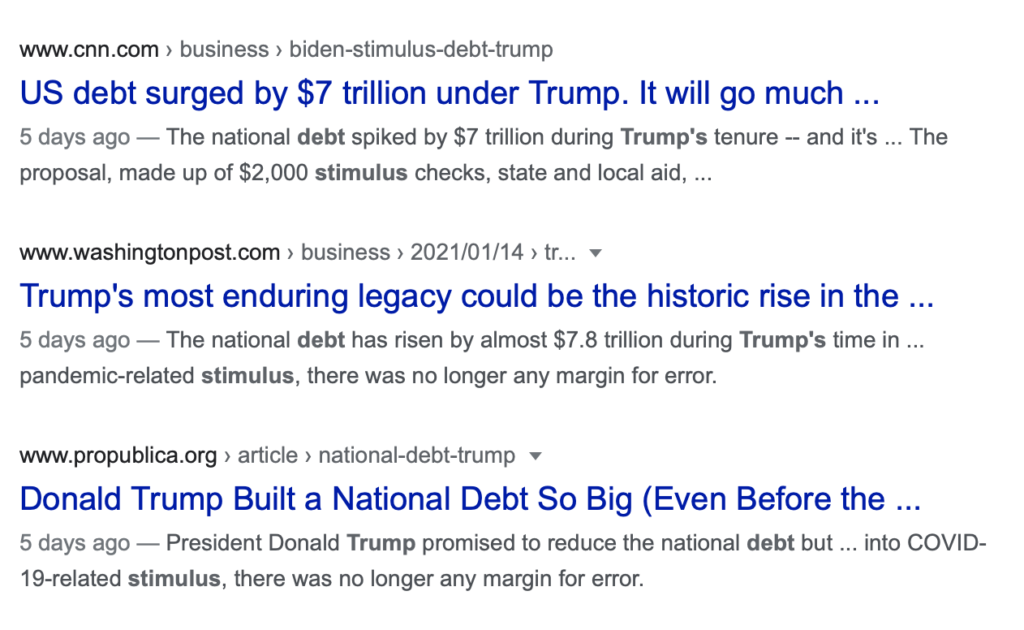 I don’t even know where the WSJ got their number. According to the Debt Clock, the current figure is $27.8T.

We added $7T to the debt under Trump, including $4.5T for two rounds of corporate welfa… — I mean, “stimulus” — and now we worry about adding another $1.9T? Are you trying to tell me that another 7% is suddenly going to topple the world’s economy or something? Trying to inflame political tensions about this just before Biden takes office is as disingenuous as it is completely predictable, and Lord knows we don’t need any more political inflammation right now.

Through the 90’s, lots of people, including myself, advocated for a flat tax, thinking it was “fair.” Well, without anyone in Congress stumping about it, that’s what we’ve quietly wound up with:

The problem is that it’s piling up debt. There’s never any money to do anything extra. So we just print more money. That sounds very scary to us normal people, who view the country’s economy like our own household’s, but apparently it doesn’t matter, because we’ve been doing just that for several decades now, and we’re just now reaching levels of debt, relative to GDP, that some other first-world countries have.

My thinking on taxation has flipped 180º, fast and hard. If we ever want to actually fund the government, and pay for all of these bailouts and stimuluses and old-fashioned “safety nets” like welfare and social security, we’re going to have to go back to a steeply progressive tax scheme, and cut out shelters that cater to the ultra-wealthy. But just like Congress voting for a pay cut or term limits or killing corporate political PAC’s, this will never happen, because these desperately-needed changes would affect the people that fund campaigns.