I’m moving my office back to the basement, and taking the opportunity to thin-out my collection of “stuff.” In the process, I’ve thrown out 2 bags of old computer parts, and I’m going to pitch at least one old computer. As part of the process, I’m wiping 4 hard drives before I chuck them in the bin, as I don’t know what’s on them. To do this, I hooked up the old PC which I used to abuse myself with ESO, and started to wipe one of them.

Then something happened to my audio. None of the audio in my monitor works any more, and my headphone amplifier — which had displayed intermittent problems before — now has a permanent, horrible ground noise. It’s like there was an electrical surge through the HDMI audio channel that blew up the monitor’s audio circuit, and then skipped over my analog mixer, and finally killed my headphone amp, which has been making ground noise intermittently for quite a while now.

Even with all I understand about engineering, electricity, audio, and computers, none of that makes sense. First, I wouldn’t think it would be possible to overload an audio channel’s circuitry over HDMI. There just has to be some sort of grounding to prevent this. Secondly, even if it did pass enough current to fry the amplifier circuit in my monitor, surely it couldn’t have hopped through the output, over the analog mixer, and then (finish) frying the (dubious) headphone amplifier.

After my decidedly un-Christian tirade that followed trying to sort out what was working and what wasn’t, I went looking again for the current news about the forthcoming, HDMI 2.1 Asus ROG PG32UQ. According to the Verge, when it debuts in Q2 2021, we should expect an MSRP of around $900. That’s pretty salty, but I’m ready. 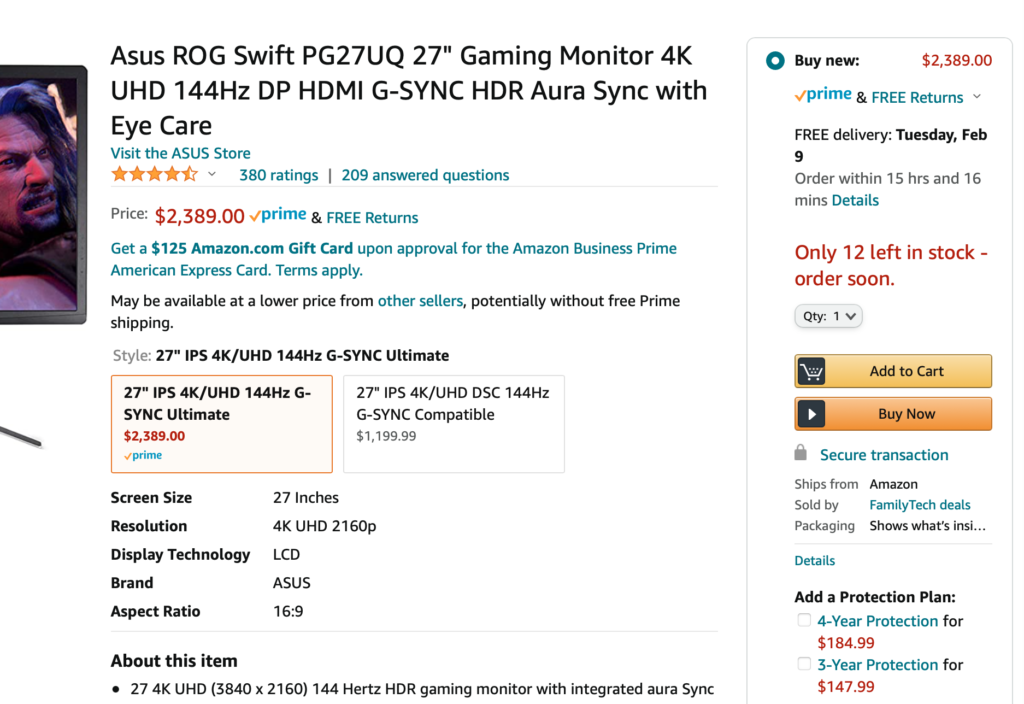 Asus is selling their 27″ version of the ROG Swift line on Amazon for $2,400! Or $1,200, but I can’t tell the difference between the PG27UQ and the XG27UQ, which literally doubles the price. Both of these choices are significantly more than the Verge’s estimation that the 32″ will cost $900, which is scary.

What’s really fascinating here is that the Verge reports that Acer has just released the Nitro XV28, which supports HDMI 2.1, but Amazon doesn’t have a single listing for that model number. According to Acer’s press release about the Nitro, they aren’t shipping until May. There are 3 models in the family, at $900, $1,100, and $1,200 price points, but there’s no real indication on that page what the differences in price are getting you.

What in the world is going on with monitors these days? I can go to Sam’s Club, and take home a 70″ 4K TV for, like $500! I don’t understand what the extra money is buying me. The widely varying prices on monitors seem to be due to the HDR part of the specs. Getting a good implementation seems to be eye-wateringly expensive. All seem to support HDR 400, which everyone seems to agree is basically like not having it at all. Given that I’ve never had it for 25 years of gaming, it seems like I can live without it until it becomes sanely affordable.

I don’t understand what’s so hard and confusing about this, and it’s precisely why I’ve gotten away from PC gaming. The same sort of relief I felt in moving from Gentoo Linux to Ubuntu, and then experienced again in moving from Linux to macOS, is what I’ve felt in moving to using a console for gaming. It’s just SO much less hassle. Up till now, I haven’t had to spend time educating myself on niggling details between unnecessarily-similarly-named models.

I’m going to try to hold out for a 32″ model of some kind, but if Amazon is correct, and the ROG 27″ is $2,400, only God knows how much it will cost. It’s clear that 27″ is a sweet spot in LCD manufacturing. I may have to give in on that. In any case, it looks like I’m going to have to wait 3 or 4 months to finally figure this out. Again, I don’t understand that. The monitor manufacturers have known about the next-gen console specs for years. You would think that they would have been more on top of this, instead of waiting 6 months after their launch.

I finally got a Playstation 5, thanks to Best Buy and Twitter. The new hardware can apparently do 4K at 120Hz over HDMI 2.1. I have a monitor that I use at 4K@60Hz over DisplayPort for my Mac, but it can only do 4K@30Hz over HDMI. So I went looking for a new monitor. The problem is that what I want doesn’t seem to exist. I can’t find a single model in the 30-inch range that can do 4K@120Hz. There are a lot that do 1080, and many that can do 1440, but if there are any that can do the full 2160, I can’t find them. What I don’t understand is that there seem to be a lot of big screen TV’s that can do 4K at 120Hz. Why aren’t they making them in desktop monitor sizes? I guess I’ll have to wait and hope that the new-gen gaming consoles push the market to make them.

UPDATE: I’ve been able to find a few select models that will do 4K@60Hz in a 32″ size, but, so far, none of the them support HDMI 2.1. Only 2.0. I’m not buying until I can find a unit that satisfies all the display features of the PS5.

UPDATE: Aha! My prediction about the next-gen consoles pushing the market was spot on. Asus — from whom I’ve bought all of my monitors for years, now — has just announced a new model, the ROG Swift PG32UQ, and it was covered just 3 days ago. It supports HDMI 2.1 and HDR and 4K@120Hz.

B&H lists them as a new item, “coming soon,” for $800, and that seems correct, but then I notice that it’s a ROG Swift PG32Q (not “UQ”), and the specs say it only supports HDMI 2.0, and I’m right back where I started. Why is this so hard? Researching further, this article says that the UQ version will be available starting at the end of the first quarter. Sigh.

Note bene: This means that all three listings on Amazon for the “UQ” model are fraudulent. They can’t possibly be that model yet. Nice, Amazon. Really keeping up your reputation here.

Anyway, I guess that will give me time to recoup from the PS5 itself, and get my tax return…