Discord says it did not ban the server for financial fraud — rather, it was banned because it continued to allow “hateful and discriminatory content after repeated warnings.” The Verge gained access to the server and can confirm the claim that users of the channel were spamming hateful language, including racial slurs.

Other shoes are dropping on the GameStop Stock Reddit Bubble. Discord deplatformed /r/wsb because of “hate speech.” A mod of /r/wsb says it was one bad actor fuzzing the language filters on the channel with unicode, and one message was all it took to trigger the ban. That sounds about right.

Then the /r/wsb mods took the sub private for an hour. What was that all about?

Like I said in my previous post, the market is a zero-sum game (in that someone has to lose in order for someone else to win), and the hedge funds with strong short positions in GameStop are taking huge losses. I’d bet a steak dinner that the owners of Discord were getting pressure from (other) wealthy people to find an excuse to shut down /r/wsb’s “command and control” channel, which is organizing a massacre of their investments.

For all intents and purposes, Wall Street investment banks are a de facto branch of the government. I’m pretty certain that ruining some bank’s day with a crowdsourced market “hack” is going to attract the ire of the SEC, no matter how “technically legal” the people on /r/wsb say it is. All it’s going to take is one small flub, like with the Discord ban, for them to step in and start issuing subpoenas.

What I didn’t say in my previous post, I’ll say now. The market is rigged. There are lots of massive players, creating artificial moves, and basically printing money. Some of the most brilliant programmers and mathematicians work on Wall Street. They have some of the most impressive computers and networks on the planet. I read once that one bank, back in the day, installed fiber optics, at massive expense (at the time) from their office to the trading center to improve their latency by double-digit milliseconds. This was enough of an advantage in high-frequency trading that it sounded like they thought it was a no-brainer. These are the people the autists in /r/wsb are up against. People with unlimited resources of money and brains.

The only reason the market works, in general, is because there always has to be people joining the market. If the market looks obviously-gamed, people won’t play. The old adage about leaving your money in the system for 40 years, and collecting about 10% compounded interest has to continue to be true, or people will find something else to do with their money, and the whole thing will collapse like the pyramid scheme it actually is. It’s the biggest money-printing machine in the world, and it’s protected by the US government. You don’t have to look any further than the housing crisis to understand that the powers that be will not allow anything to hinder their ability to print money with the machine.

If /r/wsb expects to step out, and manufacture more chaos with other strongly-shorted companies, the people leading the charge are going to find themselves being investigated. Discord says they didn’t ban them for financial fraud. Of course not. They’re not in a position to pass judgement on whether that has occurred. No, they’ll leave that to the feds, and I expect this is already being organized as I write this.

UPDATE: Reading the HN thread about the article, I find this comment, and I’ll repost his repost: 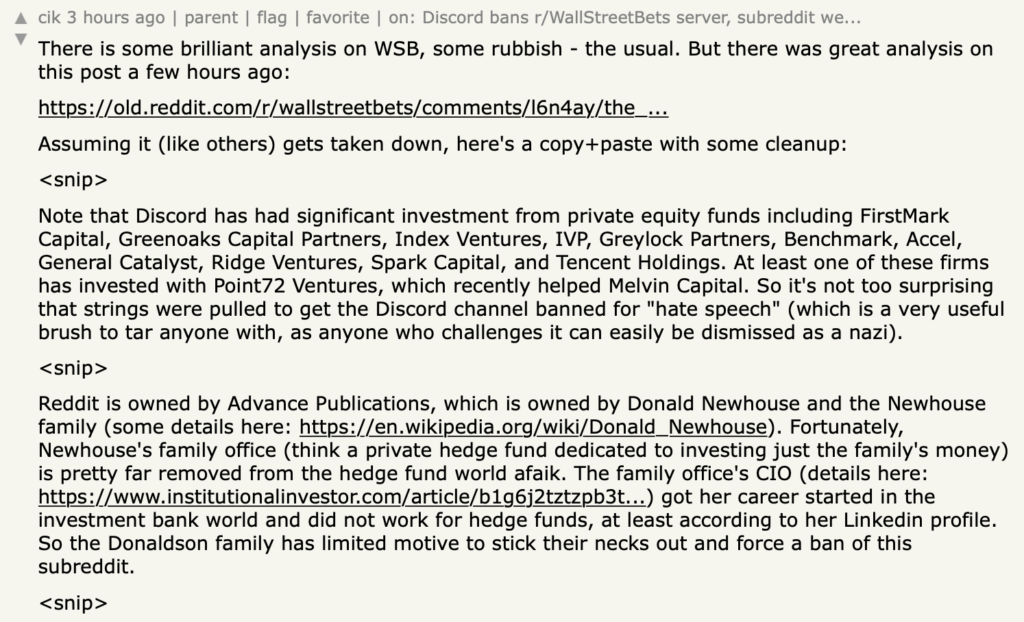 So I was spot on. There’s duplicitousness at work here. Discord is simply doing a favor for the people being negatively affected by this farce.

I note, for the record, that if Section 230 were repealed, Discord would have shut them down for fear of being inculpated in possible financial fraud, as should have been the story.