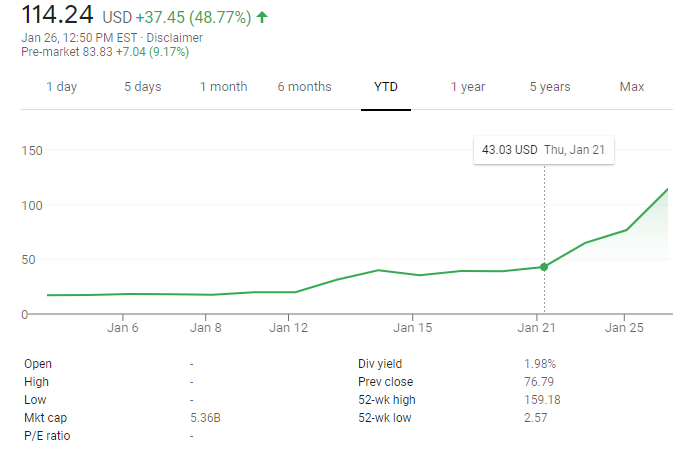 Okay, so what’s going on here? Did GameStop come up with an entirely new strategy to propel its relevance in the long-term video game industry? Did it totally restructure, coming up with cost-saving measures or store and staffing closures that make it suddenly more profitable? Was there some consequential change of leadership or outside investment in the company?

Nope, none of that. Instead, there appears to be a sort of insane tug of war going on right now on Reddit between short sellers and day traders that is artificially sending this stock on an insane rollercoaster.

In other words, this is like some strange offshoot of a meme stock, where nobody really cares about valuation and mostly only cares about potential. Except, for all the reasons we discussed in the opening, nobody really seems to think that there is any potential here. Instead — and I recognize that this is crazy — a group of traders on the WallStreetBets Reddit appear to be trying to use the power of that chat room to create its own market reality.

There’s another good, factual writeup at the WSJ (subscription required).

Disclaimer: I hate Reddit. Like, HAAATE it. It used to be a good site for discussing niche interests, like mechanical keyboards or headphones. But, since the site has become established, these subs have been taken over by the alpha nerds with a lot of money and time, who drive the conversations, which focus primarily on gear that “normal” nerds have neither the money to buy nor the time to fabricate. It’s not that it’s not interesting; there’s just a limit to how many $1,000+ keyboards or $4,000+ cans you can see until your eyes glaze over. 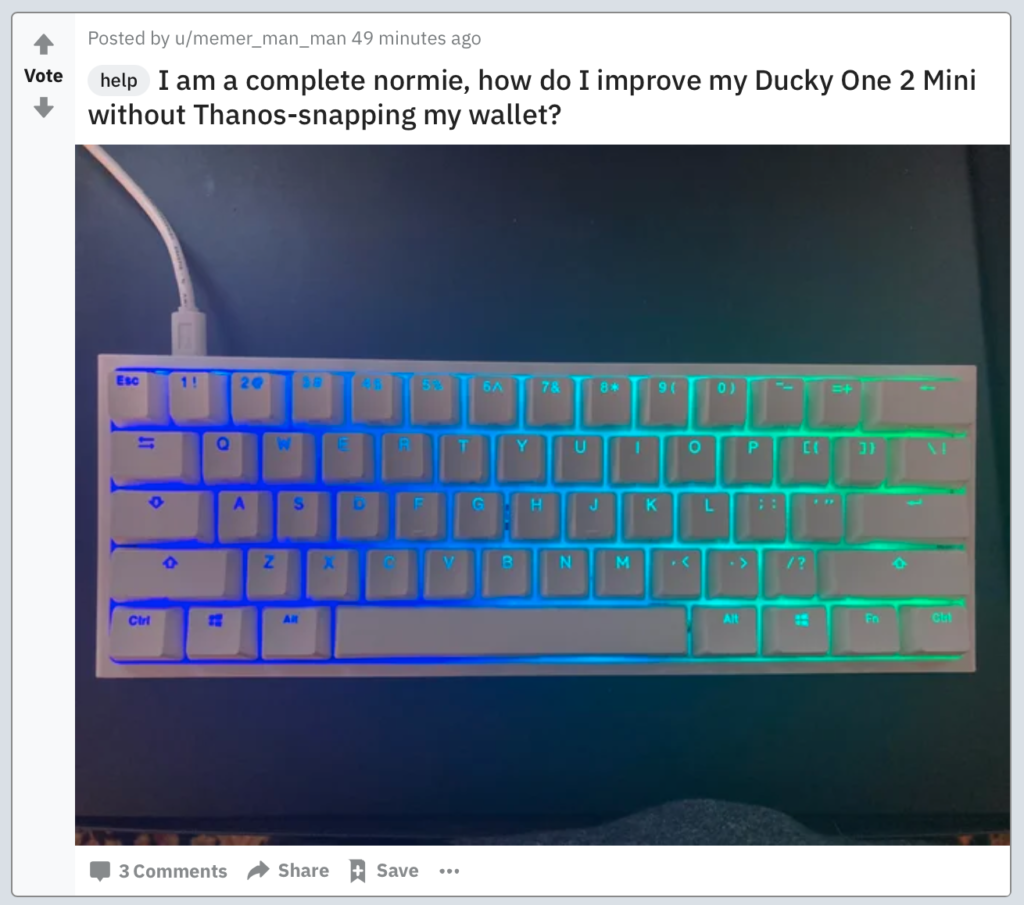 For the sake of argument, I just looked at /r/mechanicalkeyboards again, and saw this post. It’s a perfect example. Note that the submitter meekly acknowledges that he is out of his depth in the group, both in terms of knowledge and money, to avoid the predictable backlash. The post has all of four comments (after taking this snap), which took about 20 seconds to appear when I clicked the link. After that, for some reason, I can still only see three. There is one (inane) suggestion, one reply from the submitter, and one is unintelligible nonsense from a guy with astronomical post and comment karma.

Then, they top it off with what may be the worst web application in the history of the internet. It is so actively user-hostile, that if I do a search for, say, a programming question, and the result has links to the site, I go back and add “-site:reddit.com” to the search. It takes 3 or 4 clicks to expand the comments on a post there, and it never has an actual, usable answer. Never. Google execs should be lined up and shot for allowing the inclusion of results from Reddit for technical questions. It’s actually a perfect example of profit motive ruining society at large. It doesn’t matter that the results suck; it only matters that Reddit paid Google for putting their links at the top of the results.

I’m convinced that Reddit makes most of their money by tweaking their algorithms to manipulate page views and slipping content into places that it normally wouldn’t appear in favor of paying customers. I’m also convinced that the entire site it being run as an experiment in just how far you can push people around online before it starts becoming obvious, or working against you.

With all my criticisms of Reddit on record, here’s a story about how a group of day traders on Reddit is trying to “create its own market reality” by running up the stock price of a company everyone knows is ultimately doomed. (Hey, doomed companies can linger a long time, and make their execs and investors a LOT of money, but it is doomed.)

Note how they throw in that “one guy” allegedly made $11M on options so far. Remember that “alpha nerd” comment I just made?

The problem here is that Reddit has an outsized influence in the tech world, because of all the money that they’re throwing at the trade industry press and advertisers. There are massively over-inflated egos at work here, who believe the hype that Reddit is paying for. Stocks are a zero-sum game. Once the actual numbers in these GameStop stock market machinations make sense, the real players in the market are going to eat Reddit’s /r/wallstreetbets for lunch. The investment banks are going to push their billions around on the table, and the Reddit brigade is hopelessly out-gunned.

Sure, the one guy made his money. Good job. But by the time “normies” hear about these sorts of things, the opportunity to make money is gone. I looked, and the entire /r/wallstreetbets sub is filled with stories calling BS on the mainstream reporting about this story, and saying that there’s still money to be made. I’d be willing to bet that the guy who supposedly already made a lot of money is trying to influence the group into doing things to make him more money on the backside now, in a classic con man scheme.

I’m a pretty smart guy, but I don’t understand much about the stock market. The casuals on Reddit are going up against people who invent techniques of fleecing other people out of their investment money, and the wolves masquerading as sheep hiding amongst them. I strongly suspect the stock price will flatten out, and we’ll never hear how a whole bunch of Reddit users lost everything they put into it. And even if someone tries to post a writeup about how this all suddenly tilted in favor of the banks, Reddit will try to cover it up, either by manipulating the algorithm, or outright censorship.