In the wrongful death suit, Alex Kearns’ parents accuse the company of targeting unsophisticated traders like their son.

Robinhood had no customer service phone number, but Alex emailed its support address three times late that night and the following morning. He asked for help understanding what had happened, and whether he could still offset the losses with another trade.

Source: Alex Kearns died thinking he owed hundreds of thousands for stock market losses on Robinhood. His parents have sued over his suicide.

“Apps” and the black-box “algorithms” controlling them have their hands on most of the significant levers in our society now, and the companies that own them get to hide behind their “terms of service” which automatically absolves them of any legal culpability, and prevents them from being sued. And none of them have human beings to actually talk to when something catastrophic happens. (You know, like watching your wife’s Gmail account get hacked in real time, and having over 10 years of personal and financial email fall into some random douchebag’s hands.) Alex’s parents didn’t click through their ToS, though, and can’t be considered to have agreed to whatever “binding arbitration” clause they might have buried in them.

At the end of the day, though, there’s no way the courts will find Robinhood in any way responsible for Alex’s suicide. I mean, if they did, what would be next? Actually holding companies responsible for oil spills or chemical dumps, instead of fining them for what amounts to a rounding error of their revenues? Piercing the corporate veil, and jailing executives? Obviously, you can’t mess with the people paying for your election, so, ha ha, no. 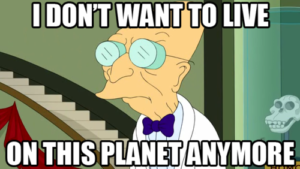