I’ve run an ad blocker in my browser since they became a thing. According to the blurb I see, from Business Insider, when I search on “first ad blocker,” that was AdBlock in 2002. And, by the way, this is what you get, if you click on that link in Google: 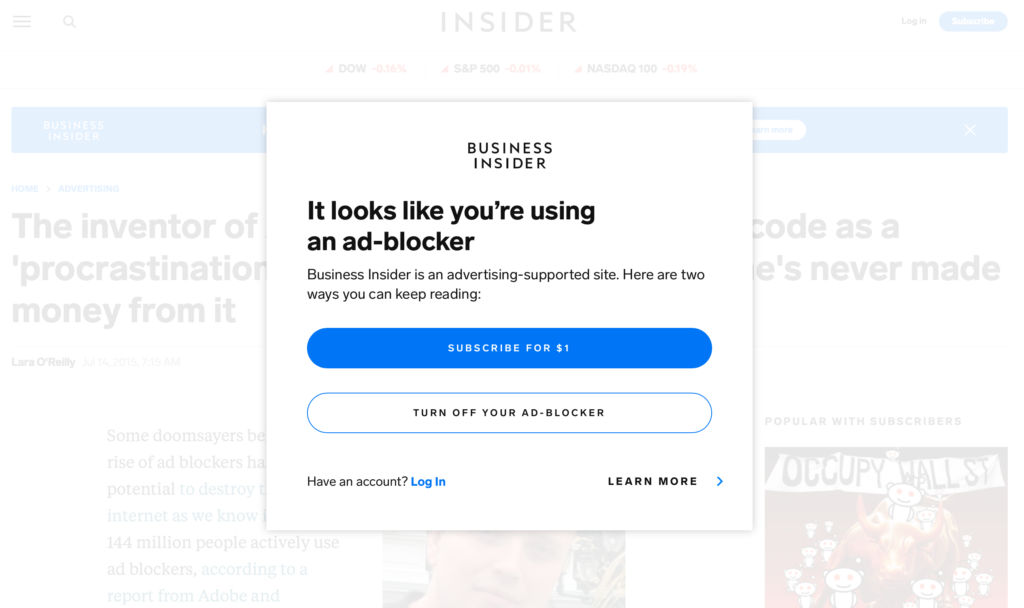 I don’t even bother any more. I just close the tab. I knew this would happen, so I clicked through to take the screenshot. I’ve learned to ignore links to BI. Google used to have this wonderful feature where you could exclude top-level domains from the results they gave you. I can at least partially understand why they don’t do that any more. Keeping an exclusion list for… literally everyone with internet access? They’re a victim of their own success.

I’ve been through the switchover to uBlock Origin, which I still use in Firefox. Macs got a whole new plugin system, and, yes, there’s still not many, so I’m wondering if this has really worked out the way Apple wanted. I’ve paid for 1Blocker on iOS and macOS, and I find it to be just fine. (I no longer use Chrome. I don’t even have it installed.)

For… 19 years now, I’ve told people about ad blockers, and just went ahead and installed them for people while I worked on their computers. No one seems to care. Ads are just “the internet” for most people. Which is why I find it surprising that places like “Business” “Intelligence” make themselves off-limits for people with ad blockers. Even after 20 years, there just can’t be that many of us. Maybe I don’t have a representative sample of internet users…

Since I know that trying to get all of my family to install ad blockers is a waste of time, I run a Pi-hole on my network. This takes care of a lot of it without anyone needing to do anything. I additionally forward my DNS lookups to OpenDNS, which keeps out most of the internet garbage. 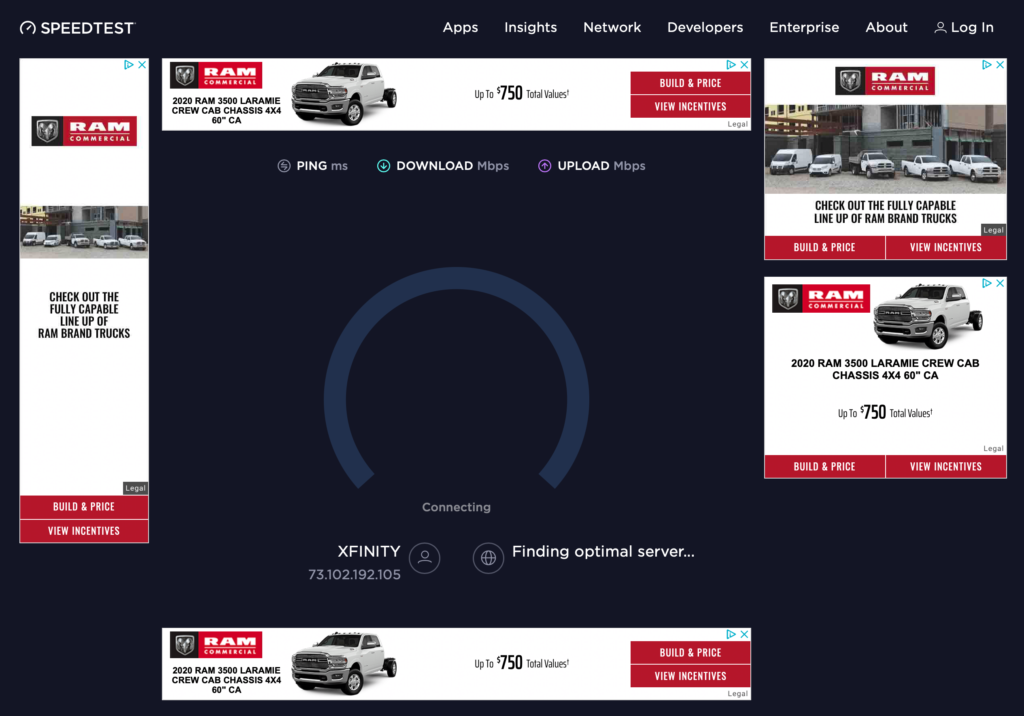 It still doesn’t work, but I get five — count ’em! — five banner ads, all for the same stupid thing. Maybe, if I just happened to be in the market for a $100,000 luxury diesel truck, one banner ad would have piqued my interest. But five? I’m surely going to click on one of those bad boys now! They really know how to market a product, don’t they? Whew-whee!

Speedtest.net’s site keeps trying to open web socket connections which are being blocked. I finally hooked my laptop up to the cable modem directly, and got the same behavior. I don’t know why it’s working like that now, what’s blocking it, or how to fix it. You can see dozens of lines about web sockets not working in the console log. Of course, Google doesn’t yield any usable answers. Once again, I’m apparently the only one on the entirety of the internet who is seeing a problem. I’m always surprised when this happens, and it happens a lot. Upon further reflection, Comcast must be blocking speedtest.net, despite claims to the contrary? I really don’t know.

Comcast’s speed test site showed that I was, in fact, getting a full gigabit, right at the modem, so I guess I can’t complain? I mean, do I really trust Comcast to tell me that they’re giving me what I’m paying for? I just wish I knew where it was all going once it gets past my router. My first test with everything connected normally only showed 500 mbps. So I started swapping ethernet cables, and got 750 or so. Then I put the cables back… and still got upwards of 800. When I first hooked this service up (and upgraded all the equipment to go with it), I could usually see 950+, so I don’t know. I’m forced to conclude that gigabit speeds are still finicky, and lossy, inside my house.